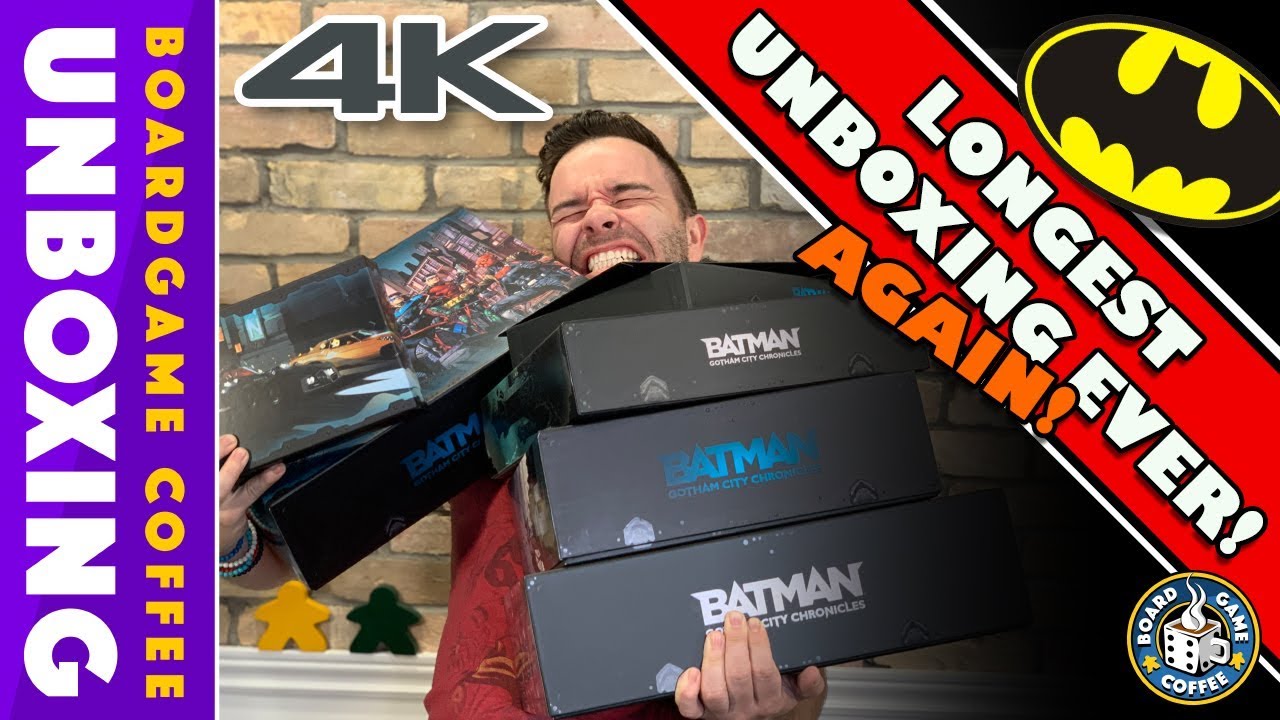 Today we are sharing a 4K unboxing of Batman: Gotham City Chronicles published by Monolith Games.

In Batman: Gotham City Chronicles, one villain faces off against a team of heroes in one of multiple scenarios. Each hero has their own character, and they control this character by spending energy to perform actions (such as Melee and Ranged attacks, defusing bombs…) recovering more or less energy at the beginning of their turn depending on their stance.

The villain controls a team of henchmen and iconic villains of the Batman universe, and these characters are represented by tiles on their command board, with the characters costing 1, 2, 3, etc. energy to activate as you move left to right down the line.

The game-play in Batman: Gotham City Chronicles is based on that of Conan, with revisions to character abilities, the addition of two different types of dice (w/ five types total), and a modified two-player set-up, the Versus Mode, in which each player has a command board and their own team of tiles that they can draft, with heroes facing off against villains.

Connect with Us:
Board Game Geek Guild:
Email us at: mailbag@boardgamecoffee.com
Instagram Daily Updates:
Facebook:
Shop Board Games:

If you enjoyed this video let us know by showing us some love.
Hit the subscribe button and like this video.

Thanks for watching Board Game Coffee. We appreciate your support. If you have questions or feedback, please share in the comments below.

About Board Game Coffee:
We are Board Game Media Professionals, helping you find your next board game.

Join us weekly, as we explore new games, share the art of board games and maybe even teach you a thing or two. Board Game Coffee’s mission is to celebrate the board game industry.

Board Game Coffee specializes in overview, review, unboxing and how to play videos.

Author adminPosted on July 7, 2020
Today on Filmed in Utah I’m checking out the short action comedy “Fetch” written and directed by Daniel Bernhardt. I’ll also be answering your...
Read More

Author adminPosted on July 6, 2020
L.A. Noire is a neo-noir detective action-adventure video game developed by Team Bondi and published by Rockstar Games. This is a walkthrough of “The...
Read More