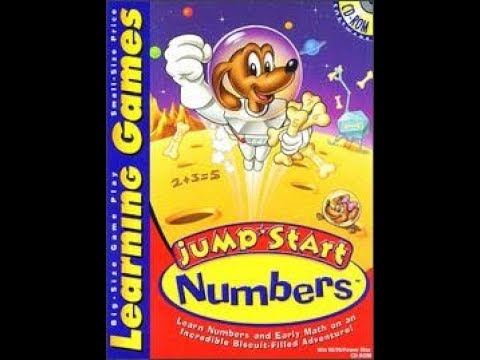 Frankie eats every single one of his doggie delights he has in his vault, and he then goes off to sleep and he has some wild dreams! Frankie must earn 100 points in each of the three dreams to re-stock his vault of dog biscuits. Be prepared for a marathon of Frankie’s wild dreams…

JumpStart Numbers is a JumpStart game released by Knowledge Adventure circa 1998. It is a part of the JumpStart Learning Games series. It focuses on teaching math skills for ages 5-8.

As in other Learning Games, at the the beginning of the game, the player can select their grade level, from preschool to third grade. Unlike most JumpStart games, users do not select one of three difficulty levels; rather, there is a difficulty bar and “easier” and “harder” arrows, allowing for many increments of difficulty. There is also no toolbar, but rather an options screen accessed by clicking a paw button.

Author adminPosted on July 1, 2020
A character (either the gorilla, goat, or hippo) will play a rhythm pattern. The beats will appear on a banner above the character. You...
Read More

Author adminPosted on July 7, 2020
What if there was an anime with everything you ever needed. Action, adventure, spies, steampunk, lolis! That’s right a show like that has finally...
Read More

What is Mandy's Room?