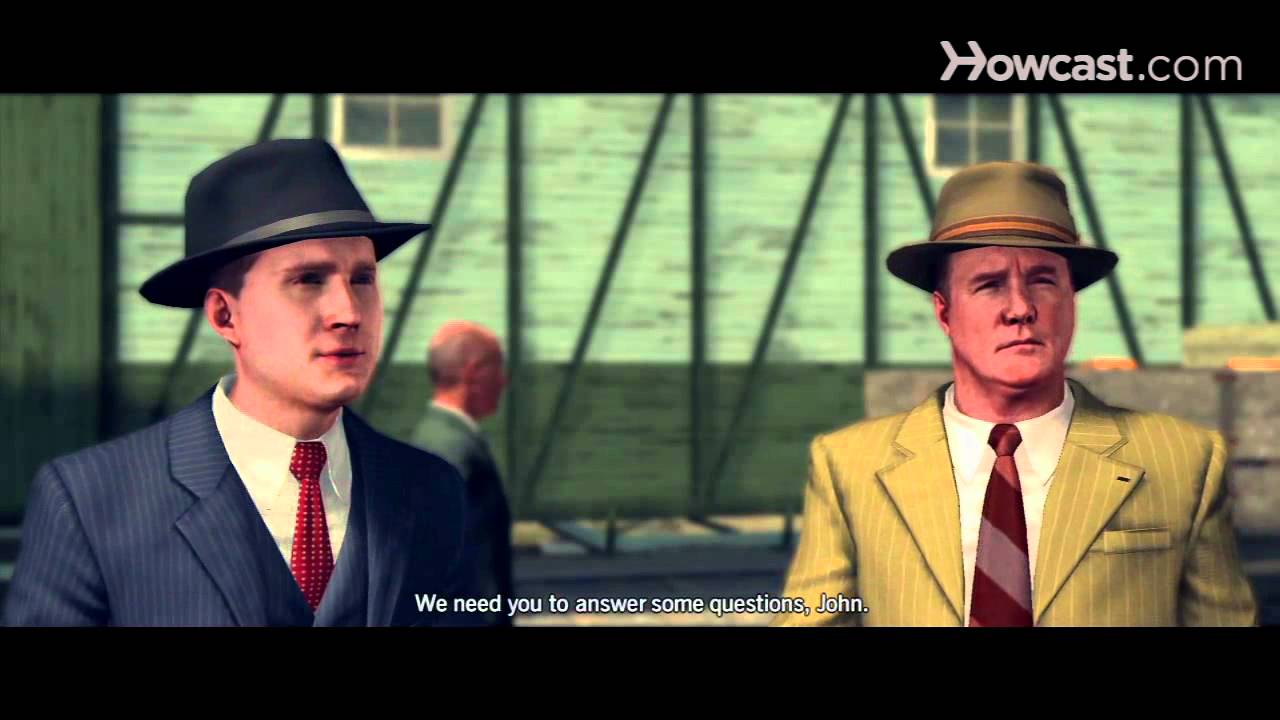 Check out part 58 of this L.A. Noire walkthrough and beat “The Studio Secretary Murder” with this online demo.

Galloway: We should keep this development with the rings under our hat until we speak with the Captain.

Phelps: We’re all on the same team, Rusty.

Galloway: Chain of command, Phelps. The Skipper will decide who needs to know. You got it?

Hart: Yeah, I look after all the rail depots.

Phelps: What have you got?

Hart: The negro, Nelson Gaines, called it in. I came down here to make sure him and the other guy, Jamison, stuck around.

Phelps: We’ll talk to the coroner. Keep and eye on both of them. What have we got here?

Carruthers: White female. Approximately 40 years of age. Lipstick smudges on the face, but no writing, at least nothing legible. Blunt force trauma to the temple, nose, and eye regions. Ligature marks point to the probable cause of death being strangulation.

Phelps: Any idea of the time of death?

Carruthers: From her temperature, after midnight would be my guess.

Carruthers: Pretty good. There is the usual evacuation smell, but it appears she’s been living rough for quite some time.

Carruthers: The autopsy will tell, but I would assume that she was inebriated.

Phelps: Can you be more exact about the time of death?

Carruthers: No later than 2:00 a.m. The state the body was in, a one or two hour window is the best I can do.

Phelps: Someone was trying to get her to come home. We could go over to the lot and see what they know about her.

Galloway: That’s going to be difficult, Cole. The Keystone Studio lot closed back in ’41.

Phelps: This is a chit for personal items, not booze. It’s an angle worth investigating. Maybe someone at Mensch’s will remember her.

Detective Phelps and Galloway, Homicide. Can you tell me exactly what happened?

Gaines: We were shunting cars over to the main line when I saw this man here lying on top of this woman. The woman wasn’t moving and seemed to be in a bad way.

Phelps: What time was this?

Phelps: Thanks for your help. Have you given Patrolman Hart your details?

Gaines: I have, sir.

Phelps: We need you to answer some questions, John.

Ferdinand: If you don’t mind, I prefer Ferdinand.

Phelps: What were you doing to the body, Ferdinand?

Ferdinand: You sure you won’t be upset?

Ferdinand: I was kissing her. It’s not against the law!

Galloway: Shut up and take your beating like a man.

Ferdinand: There’s no law against it!

Phelps: Turn out your pockets, Ferdinand. Classic Carmine. Is this yours, Ferdinand?

Ferdinand: No, I found it near her purse. I thought she could use some lipstick.

Phelps: Rusty, stop! Don’t hit him. You went through her purse?

Ferdinand: Wasn’t like she needed it. I took a look.

Phelps: Did you take any money?

Ferdinand: Wasn’t any to take. I found her lipstick and her matchbook over on the mat. Not much else.

Phelps: You found the body?

Ferdinand: Yes, I did, I work here. I was coming off shift and headed home.

Phelps: Why didn’t you report the body, Jamison? Do you know how this is going to look to a jury?

Ferdinand: A jury? What gives! I could tell that she was dead. I came through here about midnight last night, she wasn’t here then.

Galloway: Let me belt him again.

Phelps: You’re under arrest, Jamison. We’ll see how this plays out. Until then, you can think a little on how you’d like to be treated if you were found dead.

Ferdinand: I’m telling you, it’s not illegal! Me and some friends of mine…

Galloway: Clyde, can you get this sack of shit into a cell? I’ll deal with him later.

Operator: How can I help, Detective?

Phelps: I need an address on Levine’s Liquor. Closest store to the Santa Fe Avenue Railyard, if possible.

Operator: Just a moment, Detective. Closest store would be the one at 939 South Hope Street.

Phelps: Thanks for your help. You know the way, you can drive.

Galloway: Fine, where are we headed? You read that those goddamn Chinese want to sell the relief food that we’re sending them?

Phelps: Yeah, I read about that.

Author adminPosted on July 1, 2020
We can fight the commentary team of Byron Saxton Michael Cole and Corey Graves in this game and they even comment on themselves and...
Read More