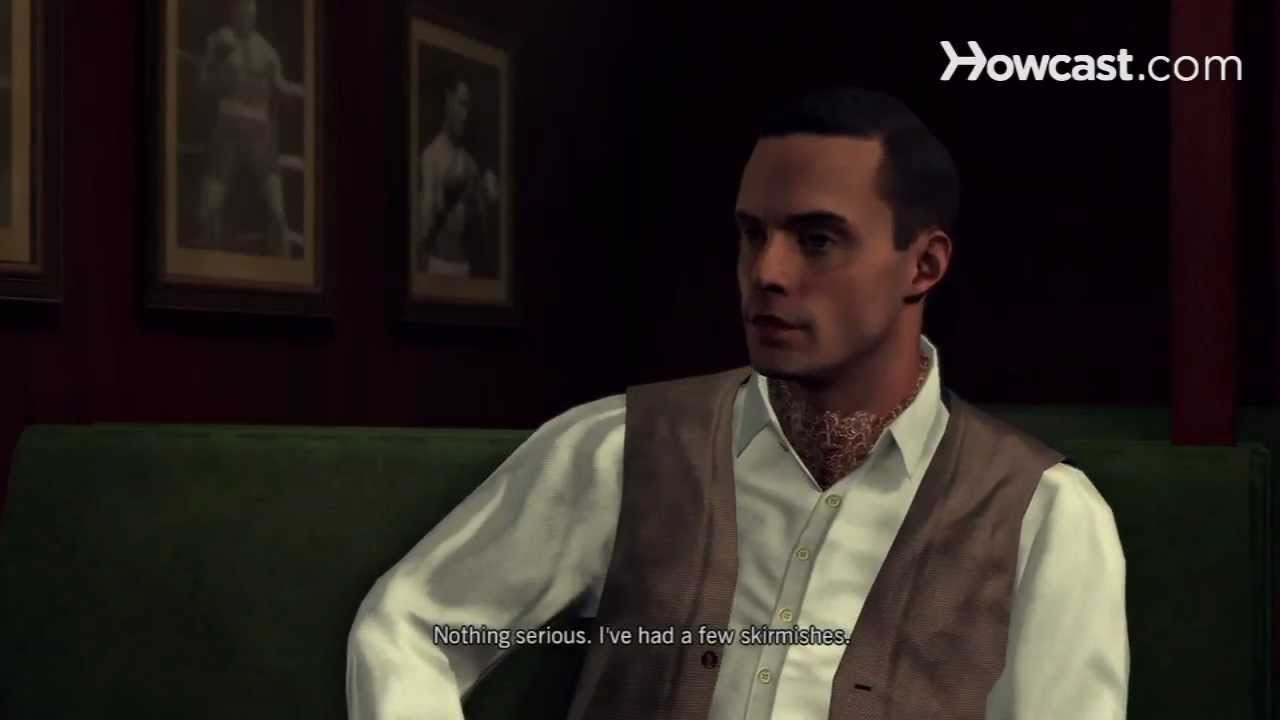 Check out part 59 of this L.A. Noire walkthrough and beat “The Studio Secretary Murder” with this online demo.

Walter: I’m Walter Mensch. Evelyn Summers? What is it now?

Phelps: As well as I wanted to know Evelyn. She’s a pain in the ass. Always coming in here, cadging drinks. Never and any money. She’s was in here a couple nights ago.

Phelps: Did she ever tell you where she was staying?

Walter I don’t know. I think she was living rough. She that kind of shtunk about her.

Phelps: Who did she drink with?

Walter: A bunch of these guys. Ask around.

Phelps: Mind if I ask you some questions, Mr. McCaffrey?

Grover: I’m just a starving writer, Detective. What do you want to ask about?

Phelps: Evelyn Summer. And why she was found beaten and strangled in the rail depot on Santa Fe.

Grover: Okay, I see your point.

Phelps: How well did you know her?

Grover: I can’t say that I knew her. It was more that I was aware of her.

Grover: No. I was at home. Writing.

Phelps: Do you want to get dragged into this, McCaffrey? Do you want us to get interested in you?

Grover: She hung out with this powder puff, James Tiernan. They haunted the public library together.

Phelps: How well do you know James Tiernan?

Grover: I know he works some kind of plebeian job at Rawling’s Bowling Alley.

Galloway: Rawlings. I know that place. Corner of Ninth and Grand. A lot of cops bowl there on Tuesday nights.

Phelps: Do you have a criminal record, Mr. McCaffrey?

Grover: Nothing serious. I’ve had a few skirmishes.

Phelps: Do you want to save me some time, or do you want me to look up your file?

Galloway: A regular fifth columnist. Nice to meet you, comrade.

Phelps: Thank you for the information, Mr. McCaffrey.

Can you drive to this one?

Galloway: And where exactly are we going?

Phelps: What did you make of McCaffrey?

Galloway: There’ll come a day, and it’s coming very soon, we’ll run him and the rest of his pinko buddies out of Los Angeles.

Phelps: I meant as a suspect, Rusty.

Robbins: What can I do for you?

Robbins: Robbins. Yes, I knew, Evelyn. I was a good friend of her ex-husband. She kept some of her stuff here.

Phelps: Can you show us, please?

Robbins: Sure. Come this way.

Galloway: You got some fine stock here, Mr. Robbins. You let us take some for the road, this case might get solved a lot quicker.

Robbins: She kept a bed here, but I probably shouldn’t have let her. An alcoholic in a liquor store, that was never going to work out, was it?

Phelps: We’ll take a look around. I’m guessing Evelyn hadn’t held down a job for quite some time before she was killed. Rawling’s Bowling Alley. Maybe Evelyn did something other than drink in her spare time.

When exactly did Evelyn work in the pictures?

Robbins: A few years ago. She worked in legal copyrights for music.

Phelps: She wasn’t always such a loner. Evelyn was reading Aristotle?

Robbins: Evelyn wasn’t stupid. The only stupid thing about her was her need to drink.

Phelps: And she was borrowing books from Grosvenor McCaffrey.

Robbins: She came by in the morning.

Phelps: A social visit, to pick up some of her things?

Robbins: She had a couple of bucks and bought a quart of rye.

Phelps: Any idea where the money came from?

Robbins: She didn’t mention it. But she did say the booze was a present for a boy. She said they had been fighting and she had to make it up to him.

Phelps: Were you and Evelyn close, Mr. Robbins?

Robbins: Not many people will be sad she’s gone. I’ll be one of the few.

Phelps: We got the impression that Evelyn had been sleeping rough of late.

Robbins: It became difficult for me to have her staying here. Her mother was trying to get her back on the straight and narrow. She’s old now. And to be honest, you have to have a good reason to want to get back on.

Phelps: Do you know a friend of Evelyn’s by the name of McCaffrey?

Phelps: We’re struggling for leads, Robbins. Did she know McCaffrey?

Robbins: She idolized him. From what I gather the feeling was far from mutual. He seems to peddle a revolutionary stance, fixing the ills of society. You

Author adminPosted on July 7, 2020
I am uploading a bunch of Gameroom vids onto Youtube simply because I was wishing there were some… The idea behind these videos is...
Read More

Is there a Haunted Toys ‘R’ Us? – The Grumps

Author adminPosted on July 5, 2020
It’s almost Halloween, and it’s time to get spooky. This week we get deep into the lore of a California urban legend: a haunted...
Read More