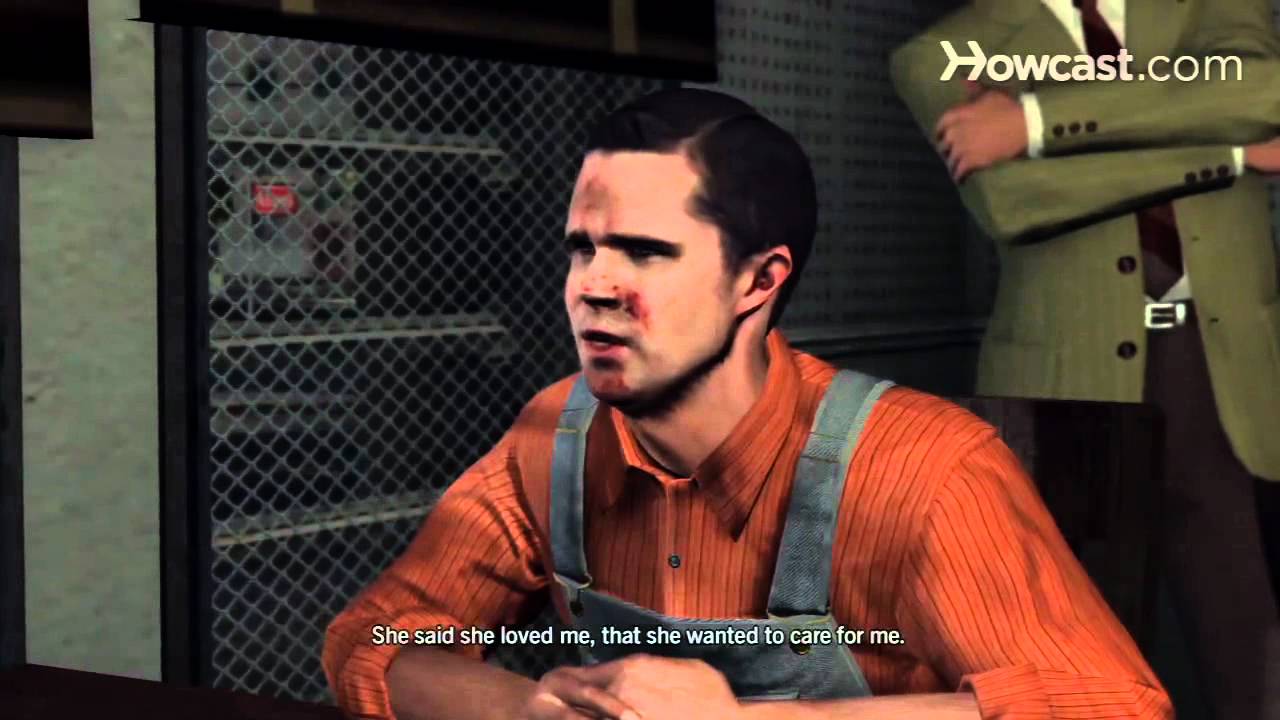 Check out part 62 of this L.A. Noire walkthrough and beat “The Studio Secretary Murder” with this online demo.

Phelps: Why did you run, Tiernan?

Tiernan: I was the last one to see Evelyn that night. I knew you would think it was me.

Phelps: Can you describe your relationship with Evelyn?

Phelps: Keep lying to me and I’ll have you charged and in front of Grand Jury before your feet touch the ground.

Tiernan: How can you possibly prove Evelyn and I were more than friends?

Phelps: McCaffrey gave you up, Tiernan. He says he saw you go into your hotel with Evelyn.

Tiernan: I met Evelyn at the Public Library. We would read for a while and then go for a drink. Last night, we went back to my hotel room and had some more to drink. I must have passed out. I woke up and she was gone.

Phelps: What time was this?

Phelps: And there’s no one who can confirm this?

Tiernan: No. There isn’t. I knew you wouldn’t believe me.

Phelps:Aristotle’s Metaphysics. The book that belonged to McCaffrey.

Tiernan: McCaffrey saw her looking at it once and laughed in her face.

Tiernan: She wanted something of his.

Phelps: We either hang this on you or McCaffrey. You better give us something.

Tiernan: McCaffrey’s been in trouble with the law before. He always makes out it was some kind of labor dispute, but I’m not so sure.

Phelps: You and Evelyn were drinking together last night, and she had no other place to stay.

Phelps: You’re lying, Tiernan. You’d been fighting with her. You fought, and…

Tiernan: I’m not lying. She got up and left. That was it.

Phelps: She left but she came back to you. She bought you a quart of whiskey to make it up to you. She told the liquor store owner. You’re in deep trouble, buddy.

Phelps: Did you kill her, Tiernan?

Tiernan: I might as well have. I kicked her out. She had nowhere to go.

Phelps: Do you own a car, Tiernan?

Tiernan: We use a lot of them. To clear jams in the pin setting machines.

Phelps: Coroner’s report says that Evelyn was killed with a wrench. I think you did it and then planted the evidence at McCaffrey’s apartment for us to find.

Tiernan: We went to his apartment. McCaffrey was up on the roof. Evelyn stole the book. McCaffrey went crazy when he found out. He said he would put her out of her misery. He can be very cruel.

Phelps: Evelyn was missing a ring from her right hand.

Tiernan: That’s strange. She always wore it. A big black circular disc with a white E in the middle. It was made of an old typewriter key. A present from the prop department at her old movie studio.

Phelps: We’re going to talk to McCaffrey. You need to think about what you’ve told us, Tiernan. You’re not in the clear.

Phelps: You ready to answer some questions?

McCaffrey: You think I have all the answers?

Phelps: People who run from the police usually have something to hide.

McCaffrey: Touche, Detective. Let’s see where this takes us.

Phelps: Evelyn died sometime around midnight. Remind me, where were you?

McCaffrey: I was at home, writing. I’m working on a manuscript.

Phelps: You’re lying, McCaffrey. You were out at the rail yard.

McCaffrey: And what do you have that proves I was there?

Phelps: How about half of Augusta Summers last correspondence with her daughter?

McCaffrey: What are you talking about?

Phelps: After you were done beating Evelyn, you searched her and found her mother’s letter. That old lady’s anguish amused you.

McCaffrey: I know nothing about a letter or Evelyn’s goddamn mother.

Phelps: So what was it doing on your writing desk?

McCaffrey: I don’t know, but if I didn’t put it there, somebody else did. Try exercising your powers of deduction on that.

Phelps: We found the lug wrench that Evelyn was battered with in your apartment. And the note from her mother, and your bloodstained clothing. We have you cold, McCaffrey.

McCaffrey: You think if I could be bothered to murder Evelyn Summers, I would be stupid enough to leave the evidence in my apartment?

Phelps: I don’t believe you, Grosvenor. The evidence says that you killed her.

McCaffrey: You can prove that I wanted to kill Evelyn?

Phelps: Tiernan is prepared to testify that you threatened Evelyn’s life in his presence.

Author adminPosted on June 29, 2020
L.A. Noire Mission Guide / Walkthrough Video in High Definition This video shows how to close a case with a Five Stars rating on...
Read More