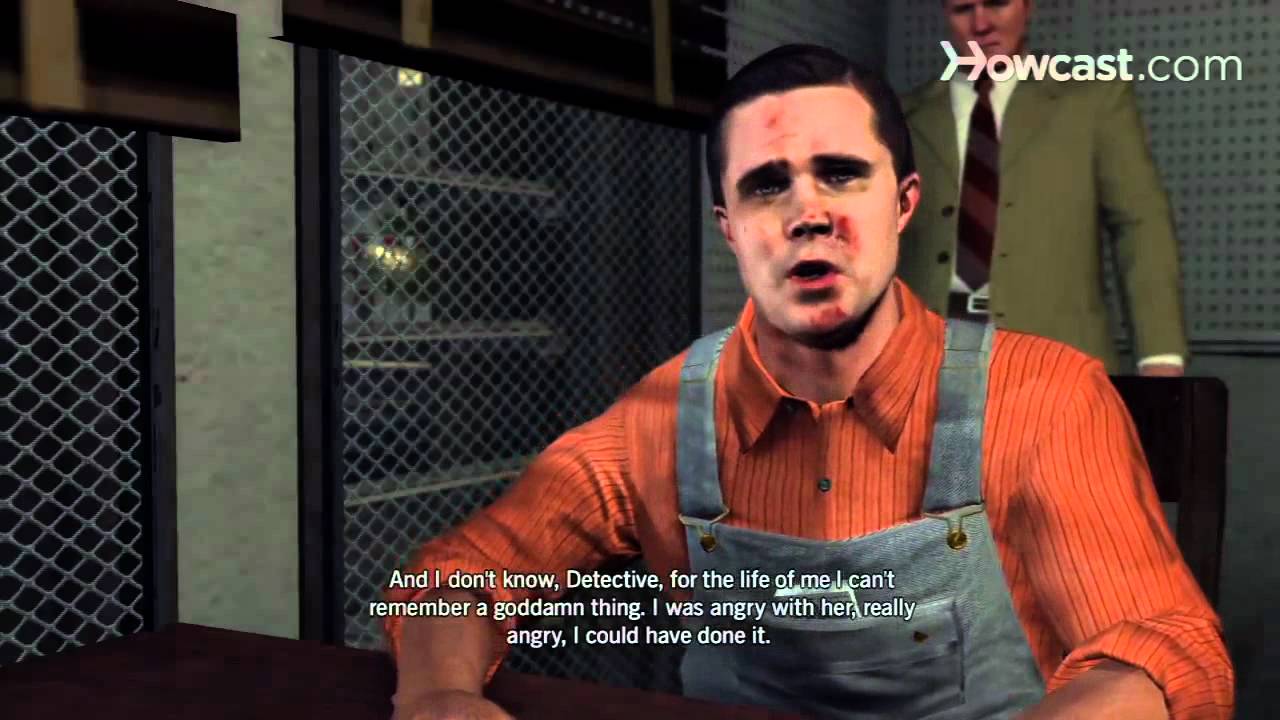 Check out this L.A. Noire walkthrough and beat “The Studio Secretary Murder” with this online demo.

McCaffrey: Speak to Tiernan. He’ll give it up.

KGPL: How can I help Detective?

Phelps: I need the jacket on a Grosvenor McCaffrey.

KGPL: Just a moment Detective. McCaffrey was formerly under surveillance by the Red Squad. Convictions for petty theft. Dishonorable discharge from the Army during training at Syracuse, assault on a local woman. Says he almost beat the woman to death.

Tiernan: You’ve spoken to McCaffrey? I can go? It’s all been cleared up?

Phelps: Not quite. We have one more question we need to ask, James. Then I think we will be done.

Tiernan: Sure, go ahead.

Phelps: So Evelyn passed out and you walked out. What happened next?

Tiernan: I woke up in the morning, very hungover. I thought Evelyn would have come back.

Phelps: I know you’re lying, James. You went out looking for her. Tell me what really happened.

Tiernan: I don’t know what you’re talking about. How can you say I wasn’t in that hotel room?

Phelps: You wound up at McCaffrey’s. You were still incredibly drunk. You passed out on his floor. It’s time to tell me what really happened.

Tiernan: McCaffrey woke me up the next morning and he showed me the lug wrench and the letter and the box. And he said I came in with them last night. He said that I killed Evelyn. And that it was all over the radio, and that he would protect me. And I don’t know, Detective, for the life of me I can’t remember a goddamn thing and I was angry with her, really angry. I could have done it. Was it me?

You were in the war?

McCaffrey: Yes, I was. Seeing the things that I saw, it changes a man. I came back here determined to change things. All I wanted was a pen and an opportunity to speak out.

Phelps: You told us before that had only minor run-ins with the police. You didn’t mention petty theft.

McCaffrey: I’ve never been in trouble for violence, that’s the salient point here isn’t it?

Phelps: You’re lying, McCaffrey. You have a history of violence, towards women.

McCaffrey: How do you turn a couple parking tickets and a petty theft misdemeanor into an assault charge?

Phelps: We know all about you and your dishonorable discharge, beating some poor woman near to death in Syracuse. You’ve never been in combat, McCaffrey. Your whole life is a fraud.

McCaffrey: She was a goddamn peasant whore. Tried to steal from my wallet. I could have fought for this country. I could have…

Phelps: And Evelyn Summers, a poor drunken nobody, stole your book.

McCaffrey: And she got what was coming to her!

Phelps: Grosvenor McCaffrey, I’m charging you with the murder of Evelyn Summers. She was a sad lady, who never hurt anyone except herself. I hope God finds a way to forgive you.

Cpt. Donnelly: Congratulations boys, you bagged a fine catch. Another Red to boot. Grand. Now, I want you to put this business about a repeat offender out of your mind. This McCaffrey creature shows no remorse, and neither will the Grand Jury. You would have to walk a long mile to find a better candidate for an unmarked plot in the prison graveyard.

Author adminPosted on July 1, 2020
I needed to reinstall Artix Linux on my (UEFI) desktop, so went through the process here. It’s basically the same as installing Arch, but...
Read More

Author adminPosted on June 30, 2020
iTUNES VERSION NOW AVAILABLE! SPOTIFY TO COME SOON! iTunes: Spotify: TBA SPECIAL THANKS TO THE GUYS AT FOLLOW THE WOLF FOR HELPING US RECORD...
Read More